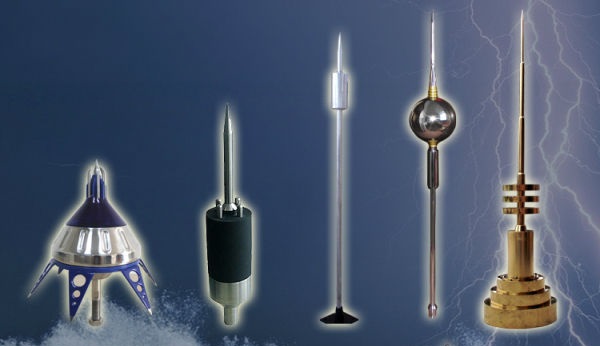 This page is a brief introduction and summary of all the lightning rods available in Sanyuan.

★ Why Buy Lightning Rods From Sanyuan

A lightning rod is an excellent conductor mounted on structures to offer protection. After the lightning rod has installed, a nearby lightning will preferentially strike the metal rod and be conducted to ground instead of passing through the structure, where it may start a fire or cause electrocution. The lightning rod can be mounted on buildings such as skyscrapers, apartments, or infrastructures like power plants, television towers, and bts towers to provide reliable protection against a direct lightning strike.

This is the most common and economic lightning rod. Modern conventional lightning rod has adopted optimization for better current pass and structural integrity.

The concept of Early Streamer Emission (ESE) was brought up as early as 1914. Lightning rods that utilize this principle enhance air ionization near the rod, thus creating a much larger zone of protection than conventional rods. Early ESE lightning rods were built upon radioactive materials. Today, all ESE rods have abandoned this dangerous design and use a more safely electrical ionization device. The ESE has more than 30 years of service history, and it has been proved effective in most cases.

This is a conventional lightning rod. Its shape has been fully redesigned to take lightning strikes effectively.

This ESE Lightning Rod is designed in Italy and manufactured in China under authorization. It has passed 3000 KV test in China's national laboratory in SJTU.

Nimbus is the series of new generation lightning rods with early streaming emission system. It is now protecting more than 30,000 installations worldwide.

TOPIKE ESE rod is also known as IONOSTAR lightning rod. It is designed in France by Pouyet and made in China under license.

Satelit ESE Lightning Rod is made by French company Duyal-Messien. This series includes two models, which are Satelit+ and Satelit 3.

CIRRUS is a lightweight (3.6kg) ESE lightning rod made in Deutschland. It has a concave-convex tip to improve the efficiency

The O.MEX ESE rod is imported from Italy and assembled in China. It is built in accordance with China's national GB50057-94 standard.

IF3 ESE rod is an innovative lightning rod that can produce an upward leader in advance to entice downward leader, providing a larger area of effective protection

ABB Group is a NYSE listed Swiss company. It is has leading technologies in utility, transportation, infrastructure and other industry sectors. Following the revolutionary trend in lightning rod, ABB also developed its own ESE-based lightning rod. When installed at 60M height, an ABB OPR's effective radius can be as much as 120M.

★ Why Buy Lightning Rods From Sanyuan

● Sanyuan has China Meteorological Administration's certification for lightning protection project. The company has more than ten years of experience operating throughout China. We have rich experience in lightning rod installation, and we can provide practical advice for you to choose the most appropriate lightning rod

● Sanyuan is also a retailer and manufacturer of lightning protection equipment. We have a long-term cooperation with major lightning rod manufacturers in EU. All lightning rods listed above are available in our stock and can be delivered immediately upon your request at the most favorable price.

Sanyuan Group is a leading telecommunication accessory manufacturer in China with more than fourteen years of rich experience in lightning protection projects and selling lightning rods/SPDs. We sincerely welcome all customers around the world coming for business cooperation. Sanyuan Group looks forward to hear from you!